Our next stop was Mesa, Arizona. Why Mesa? Mesa is the home of Organ Stop Pizza, a place that has been on my must-experience list for over a decade. Organ Stop is a huge pizza palace that houses what has become the largest mighty Wurlitzer theater organ ever made. The organ dates back to 1927 and was originally installed in the Denver Theater. It was brought to Mesa in 1975, rebuilt, and expanded since that time. As a big fan of that grand theater organ sound, I couldn't wait to sink my ears into the place.

But first, we had to get to Mesa, and in doing so, we faced a bit of a problem: We were going to be on Interstate 10 in Phoenix, Arizona for part of the trip. Guess what was happening on that stretch of highway while we were to pass through there in mid-September? Someone was shooting at cars and trucks! In a fit of bravery (or foolishness), we decided to take our chances and play I-10 roulette. (Given our previous mishaps on the road, arriving in Mesa unscathed was not a sure bet.)


I am pleased to say that we completed the trip to Mesa without incident. I am also pleased to report that the sight and sounds of the organ made risking life and limb a worthwhile endeavor.


The organ is played nightly in 45-minute sets by top-notch theater organists. We stayed for three sets. The pizza was quite good; the organ's sound was OUTSTANDING!


From Mesa, we started heading to Albuquerque, New Mexico for the big balloon fiesta. Along the way, we visited the Petrified Forest National Park in Arizona. The petrified fossils of fallen trees that lived about 225 million years ago are scattered throughout the park. From a distance, they look like ordinary logs. 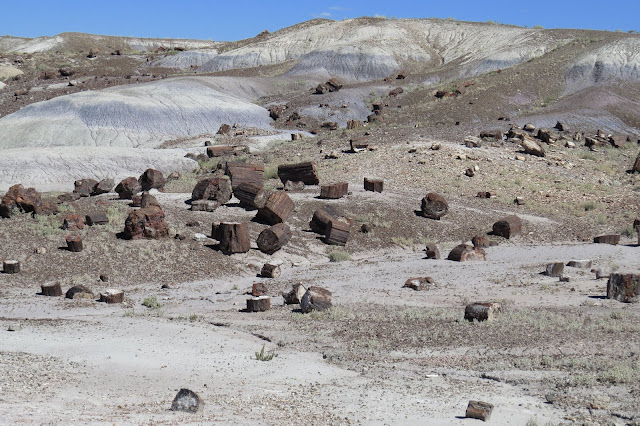 Up close, they take on a crystalline brilliance. Touching the petrified logs was a strange experience, as they felt quite different than I expected based on appearance. When I tapped on the bark, I thought it would feel like wood, but instead, it felt like stone.

In the northern part of the Petrified Forest National Park lies a portion of the Painted Desert. This is yet another location that has to be seen in person to be fully appreciated. Here is a panorama I took as the sun began its descent into the western sky. (Click on the photo to see it full screen.)

Speaking of sites that are amazing to behold, we also visited White Sands National Monument in New Mexico. Great wave-like dunes of gypsum sand glisten in the sunlight and stretch out as far as the eye can see. It's a bit like being at the beach, but without water!


Coming up next: The incredible Albuquerque International Balloon Fiesta.