This past weekend (Jan. 18-20), Janet and I finally lost our RVirginity!  Yes, we took our first road trip.  Janet's bagpipe band's competition season kicked off with the Central Florida Scottish Highland Games, in Winter Springs, Florida.  Rather than simply drive to the games as we've done for many years, this year, we decided to take our house!  Early last week, I made a reservation for two nights in a nice RV campground in Sanford, Florida, which is near Winter Springs and 225 miles from our home base in Fort Myers.  I could tell you that the whole trip pretty much went without a hitch, but I'd be lying -- without a hitch, there we be no way to tow our 5th wheel!

1. When we were getting the rig ready for the trip, we couldn't get the awning braces to line up in the retracted position.  We messed with the awning for about half an hour, opening and closing it several times, hoping that things would somehow line up properly.  Alas, they did not, but fortunately, a friendly neighbor with many years of RV experience showed what to do, which took all of about one minute!  (Nothing like the soothing voice of experience.)

2. Unlike our dog, Annie, who loves riding in the truck, our cat, Elkay, does not appear to be a big fan of traveling.  He's a big cat, and we put him in a large carrier in the back seat of the truck.  Normally, he has immaculate litter habits, but shortly after travel commences, he decides to relieve himself in the carrier!  Elkay demonstrates his joie de voyager by dropping a deuce.  On the outbound trip, we tried feeding him very little in the morning, but that didn't help.  On the return trip, the unsavory deposit was accompanied by an emptying of the feline bladder!  Lesson learned: We've put a small litter pan in the carrier for future journeys.  With any luck, Elkay will use it.  [Note to self: Never take Elkay on a plane in a cat carrier!]

Our driver (Janet), and the ground crew (me) continued our fine teamwork, handling departures, transit, and arrivals in style.  The odd thing was, as Janet pointed out, that after traveling 225 miles from Fort Myers and arriving in Sanford, we were still home!

We had a great time; the round trip was safe and uneventful.  Unsurprisingly, the largest expense for the trip was fuel: a whopping $165.  (OPEC has sent us a thank you card!)  The high cost of fuel will keep us from taking long distance, short duration trips.  Now we're looking forward to long trips this spring and summer.
Posted by David Keller at 6:35 PM 3 comments:

You asked for 'em, you got 'em.  Here are interior and exterior photos of our Jayco 5th wheel trailer (at its base camp in Fort Myers, Florida). 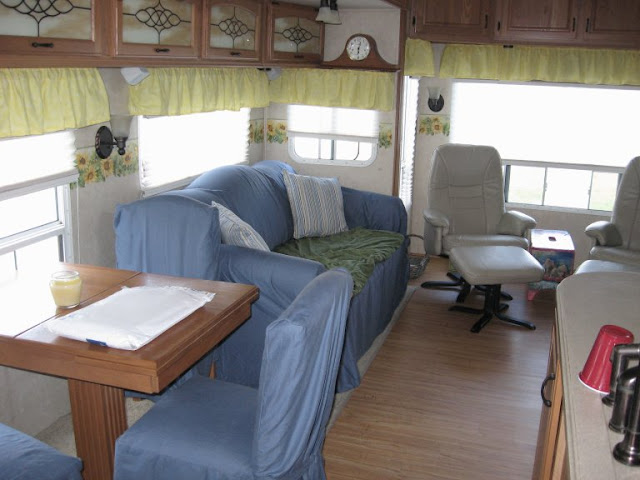 The dining table (left foreground) has an extension that pulls out, and the top opens up to access storage space inside the table.  Note the storage compartments above the windows. 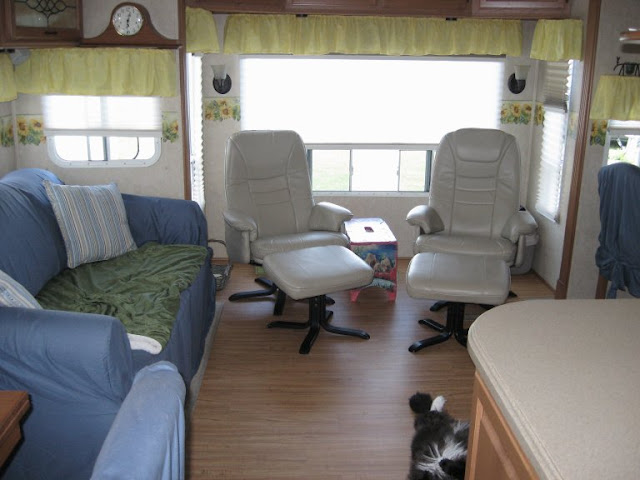 The convertible sofa opens to a double bed.  Note the bay window at the back (and the cat snoozing on the floor in the right foreground). 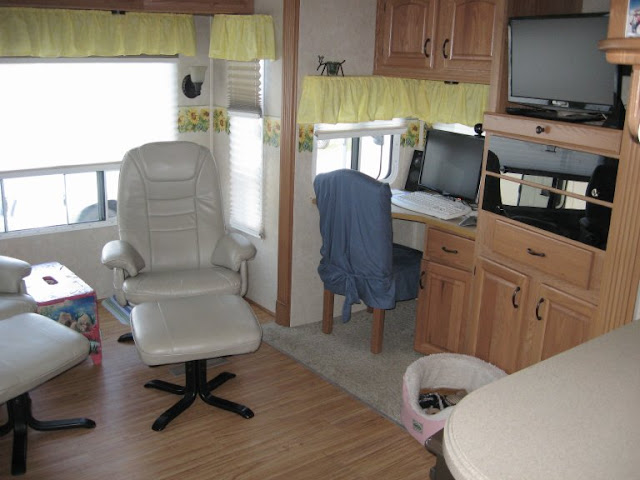 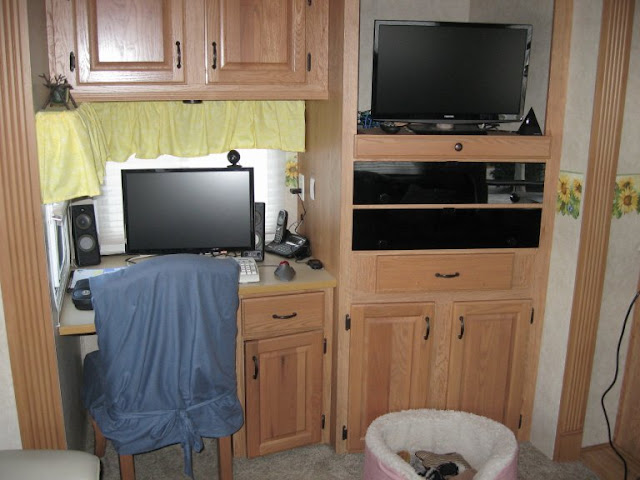 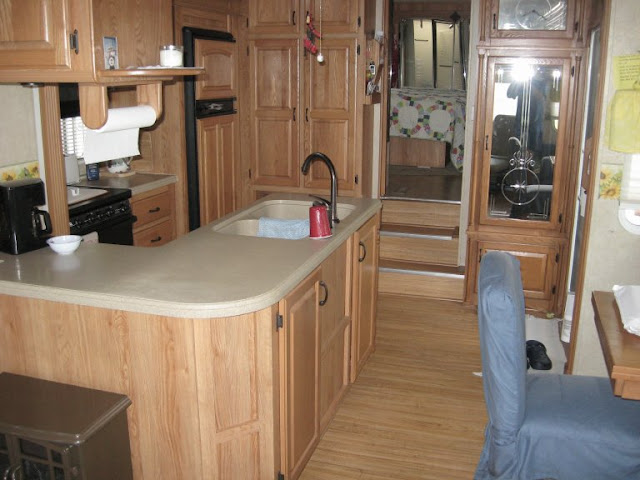 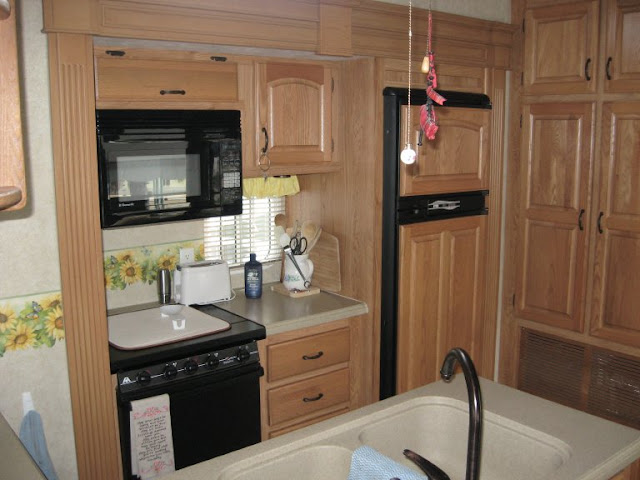 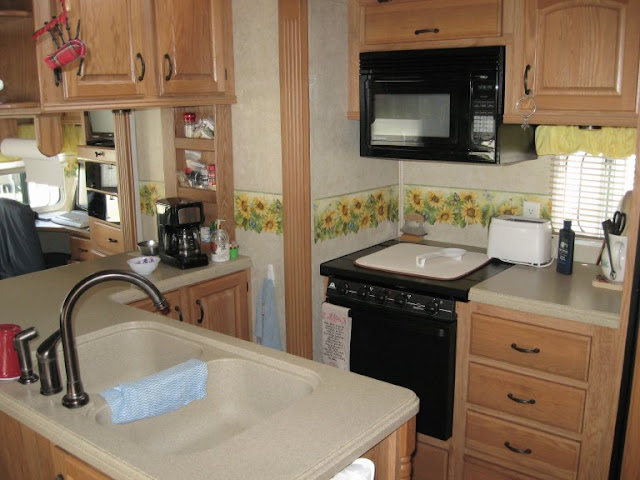 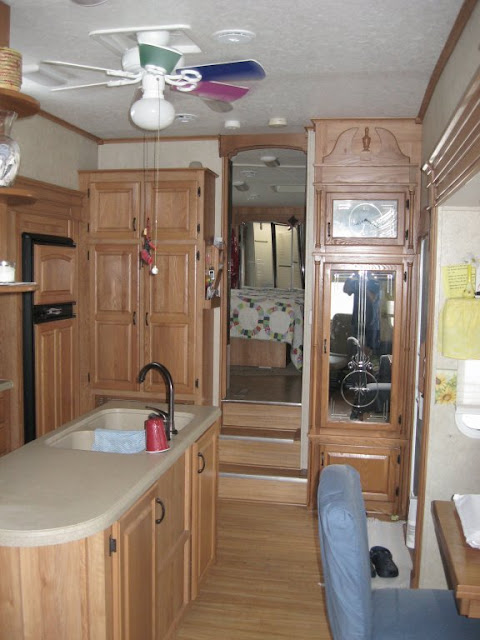 Yes, the main room is tall enough for a ceiling fan! 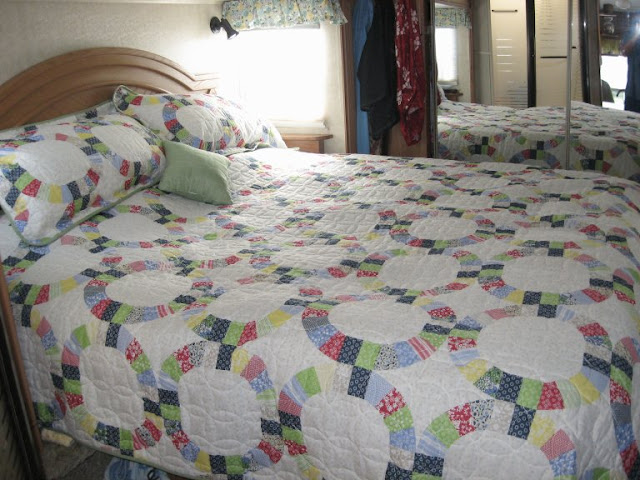 Bedroom upstairs has a king bed!  (The bed is on a platform that pulls up, under which are two large storage bins.)  Behind the mirrored sliding doors (background, right) is a large clothes closet. 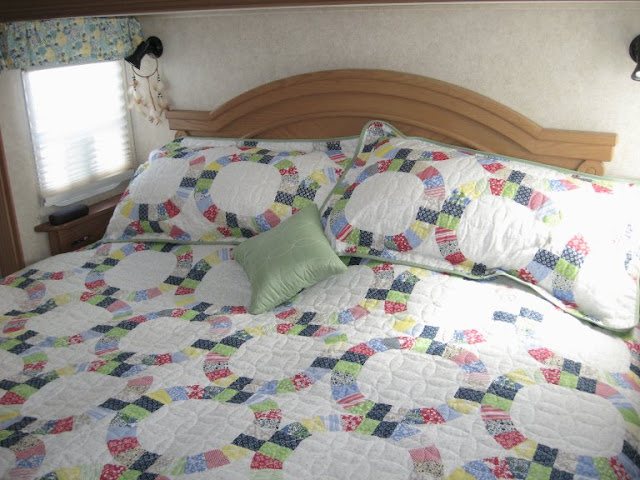 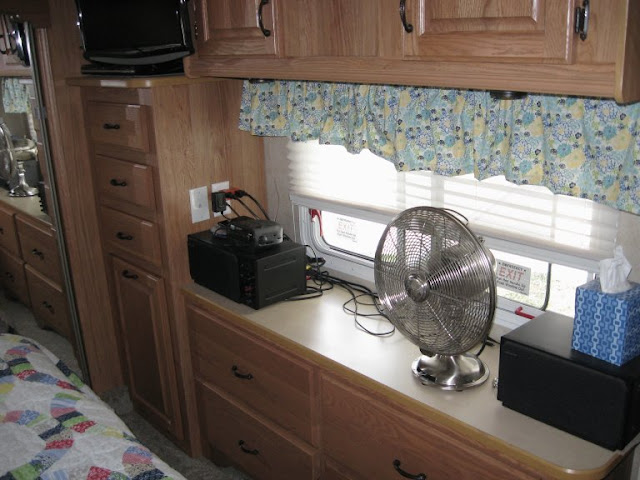 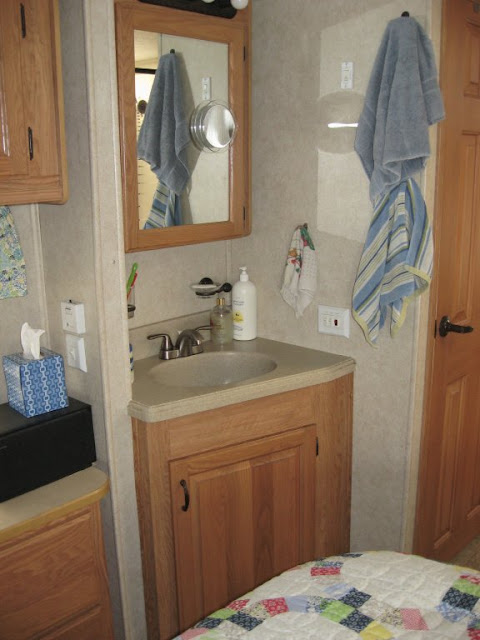 (The bathroom is behind the door on the right.) 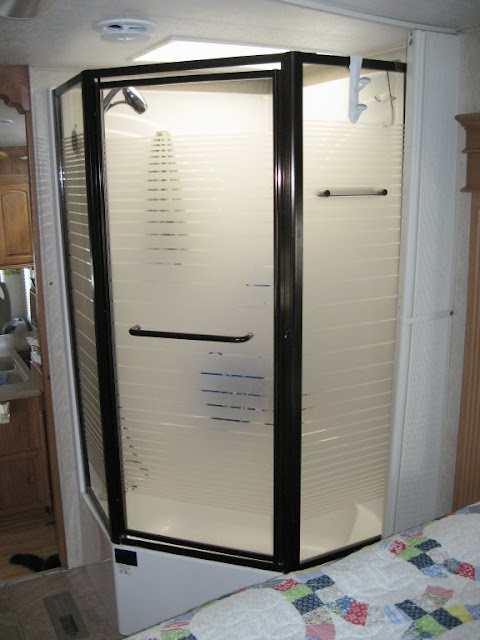 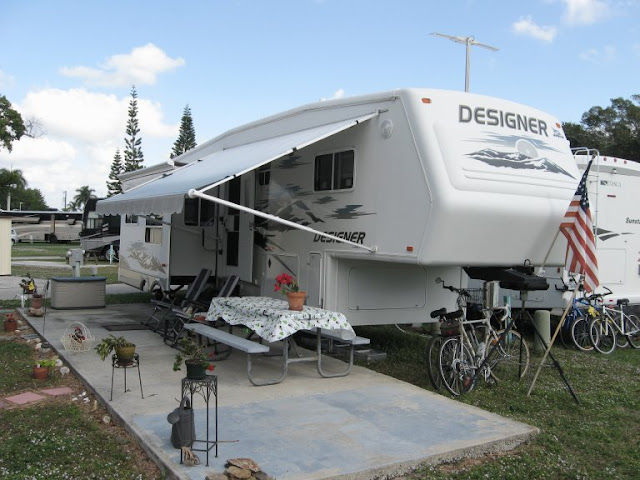 On our lot at the Fort Myers Beach RV Resort.  (All of the slideouts are open: One on left, three on the right.  That's the trick for making a roomy interior!)  Hoisted up near the front of the roof is an amplified "batwing" antenna for TV and FM radio reception. 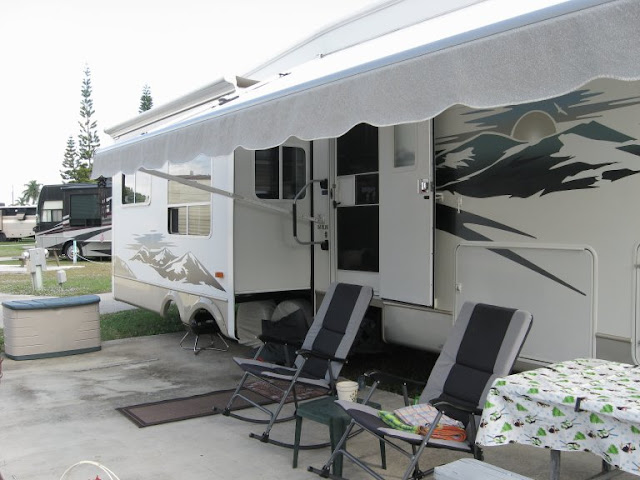 The rocking chairs (under the awning) are very comfy.  They fold up flat and get stowed in the large "basement" storage compartment (which has two doors, one of which is behind the right chair). 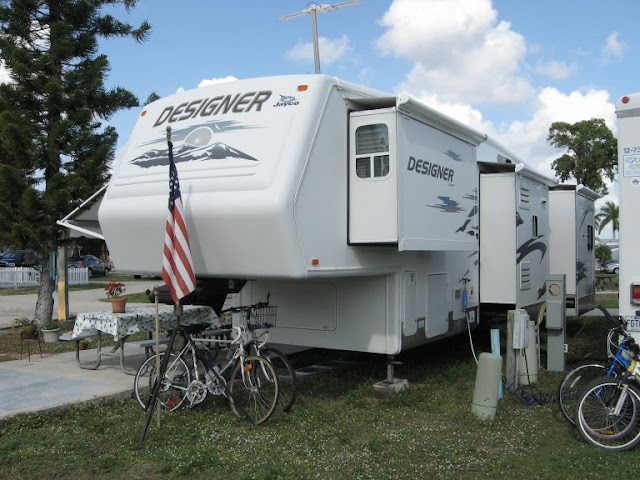 The right side has connections for water, sewer, electricity and cable TV; exhausts for the water heater, furnace and refrigerator; and a compartment for LP gas bottles.  At the front (above the bicycles) is the coupling pin, which attaches to the hitch in the bed of our truck for towing. 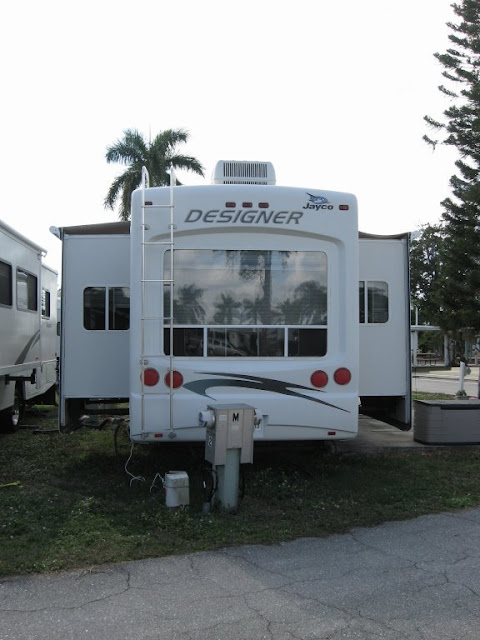 Coming up next: Our first road trip.