Our Journey Started Off With A Bang!

As I write this blog entry on Saturday, June 22, 2013, I’m sitting under our awning in a comfy rocking chair.  We’re in , , and the weather is sunny and cool, with low humidity – a far cry from the hot, humid tropical summer weather we left behind in southwest .  We arrived yesterday afternoon, after traveling 950 miles.  Whoever said “Getting there is half the fun” didn’t ride along with us!

We departed on Wednesday, June 19 at 9:00 a.m.  Everything was going smoothly until 9:45 a.m.  We were heading north on I75 at about 60 mph, the dog and cat sleeping soundly in the back seat, when suddenly a loud BANG got our immediate attention. Seconds later, Janet looked in her side view mirror and saw chunks of tire flying across the highway behind us!  Oops, too bad those chunks came from ONE OF OUR RV’S TIRES!  Janet pulled off the road onto the shoulder, and we got out of the truck to assess the situation.  Where there used to be a tire on the rim attached to the left-front axle of the RV was now what could best be described as Goodyear shredded wheat!  Since you have to see it to believe it, an unretouched photo of what was left on the rim after the blowout is shown here: 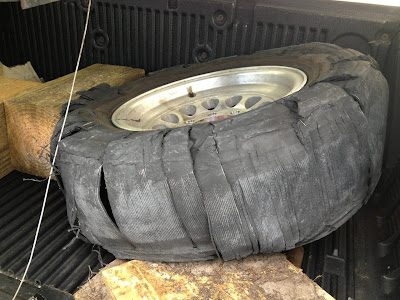 On the RV itself, a wheel well trim piece and the sewer line end cap were blown away, now debris on the interstate.  Fortunately, the tire on the left-rear axle left held firm.  There was no loss of steering control, and no other damage was done to the RV.

I grabbed my cell phone and punched up Good Sam emergency roadside assistance (similar to AAA, but for stranded RVers).  I was glad that the week before we left, I had the foresight to put the Good Sam number and our membership number in the phone’s contact list so that in the event of an emergency, I wouldn’t have to waste time digging it up.  I was also glad that one of the “in case of emergency” things I had prepared for was to note and remember the location of the little crank handle that lowers the spare tire from the underside of the RV.  About 35 minutes later, help arrived in the form of a nice guy whose truck contained all the heavy-duty equipment needed to change the RV’s tire.  Knowing that all five tires (four on the rig, plus the spare) were the same age, and not wanting to chance another tire meeting the same fate as its erstwhile companion, I asked the guy if he could recommend a good place, as close to our current location as possible, that sells and installs RV tires.  In fact, he did know of a shop to recommend, about a half-hour drive to our south.  (Yes, I know, that’s the direction from which we came!)

We arrived at the shop without further incident.  Naturally, they didn’t stock the tires we needed, but the manager was very helpful, and was determined to find them for us.  After making several calls to tire distributors, the manager (we’ll call him “Dave”, which, strangely enough, was his actual name) told us that the tires would have to be delivered from , and would arrive the next afternoon!  Hoping for a better answer, I asked (or rather implored) Dave if he could find some place closer, perhaps in Fort Myers, that could get the tires to us later in the day.  A few more calls later, Dave found a distributor in that had tires we needed.  Problem was, it was too late in the day for them to deliver the tires to our location thirty miles to the north.  Hey, no problem, I’ve got a big truck and a burning desire to be a tire delivery guy.

An hour later, yours truly, newly-minted tire delivery guy, returned with the goods.  Here is a photo of me with the valuable cargo: 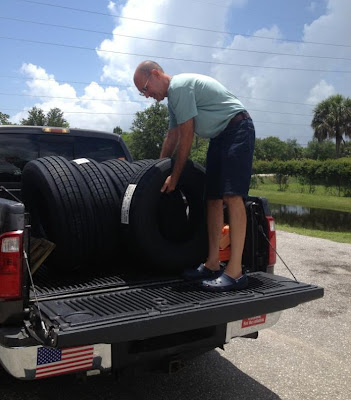 After a delay of six hours, with their RV sporting five new tires, the Griswolds were on the road again!  Just before we left the shop, I experienced the second blowout of the day; this time it was my credit card, dinged to the tune of $2,400!  And just for fun, I forgot to get my set of RV keys back from the shop, a fact that did not dawn on me until later that night!  (Thank goodness Janet had her RV key set with her!)

We finally arrived at our first stop, a campground near , just after 10 p.m.  I pulled on the hitch lever to unhitch the RV, and just as the hitch opened, a cotter pin that holds the hitch lever to the hitch broke off into several pieces!  This came as a bit of a surprise, because, don’t you know, the same thing happened when I unhitched the RV at the tire shop earlier in the day.  One of the guys at the shop remedied the problem by putting in a new cotter pin.  The new pin must have been made of a very soft metal, because it broke away the very first time a force was applied to it.  “Probably made in ,” I groused.  Enough already, I’ll deal with this tomorrow morning.  “After all,” as Scarlett O’Hara said, “tomorrow is another day!”

But wait, there’s more: As a ground crew guy dedicated to safety, I ordered a fancy tire pressure monitoring system for the RV a couple of months ago.  Thanks to modern technology, should a tire lose air, get too hot, or suffer a blowout, a display in the truck would indicate the problem immediately, accompanied by loud beeps and a flashing red warning light.  After I installed the system, I tested it by unscrewing a sensor from a tire’s valve stem.  Beep, beep, beep… flash, flash, flash – the system worked perfectly.  I’m pleased to tell you that under actual driving conditions, the system did indeed indicate a tire blowout – about thirty minutes after it occurred!  I reviewed the tire pressure monitoring system’s instruction manual, looking for something I might have missed, and I found it: “Made in .”  Hmmmm!