How we got the rig home, RTFM, and other surprises


Now that we've bought the big rig, the first challenge is getting it from North Fort Myers to our house in Cape Coral, a distance of about ten miles.  Simply drive it home?  Not quite!  First, the fifth wheel RV has to be hitched to the truck.  How to do this is certainly beyond the scope of Janet's and my driving experience.  While the task seems daunting to us newbies, I remind myself that we see these rigs on the highway all the time, often being driven by geezers, and they manage to do it.  (By the way, the definition of "geezer" is someone who is older than we are.)  We don't want to enroll in The Tractor Trailer Truck Training Institute (motto: "with any luck, you can drive a truck"), so we opt for the learning by watching carefully method.

The day the RV was taken for its inspection (before we bought it), the owners were nice enough to give me a complete run through of how to prep the fifth wheel for towing (taking it from living condition, with its four slides out, all hooked up to water, sewer, and electric utilities, to ready-to-be-hitched condition), and how to connect the fifth wheel to the hitch in the bed of the truck.  Janet was not with me that day, so I decided to make a video of the whole process.  (A great idea, because there were so many details, I'd never have remembered them without several reviews, let alone try to explain it all to someone else.)  Janet and I watch the video, and wonder if we'll be able to do it ourselves.  We assure each other that since geezers can do it, we'll be able to do it too.

Fast forward to the big day when it's our turn to actually try it ourselves.  Janet has driven a school bus, so she's going to drive the truck.  I'm going to be the ground crew.  The means I get to prep the fifth wheel for towing, after which I guide Janet to line up the hitch with the king pin on the fifth wheel, hitch it up, make various electrical and mechanical connections, raise the fifth wheel's "landing gear", and verify we're good to go.  The first rendezvous and docking of the space shuttle with the International Space Station looks like a piece of cake (and seems much less dangerous) by comparison.  Oh, by the way, any errors or omissions on my part can result in severe damage to the truck and the fifth wheel.  Not too much pressure there!

Janet's first big challenge is lining up the truck with fifth wheel so it can be hitched.  They say that clear communication is the key to a good marriage, and boy are they right!  In order to marry the fifth wheel to the hitch at the proper position and height, I've got to guide Janet to the right spot, and she's got to maneuver the truck precisely, mostly going in reverse.  Somehow, we succeed in short order (what a team we are), and we're on our way to Cape Coral, Janet solo driving a 19-foot truck towing a 37-foot fifth wheel, while I follow in my car.  When we arrive, Janet's knuckles are a bit white, but she made it like a pro.

This is what's now in front of our house: 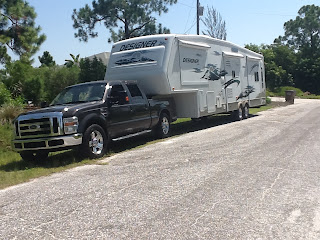 The transportation challenge behind us, I reflect on how my newbie naivete has already allowed me one surprise today: Waste management!  In an RV, when the water in the sinks or showers go down the drain, or after you do your business on the commode, the waste gets collected in tanks.  There are three waste tanks in this fifth wheel: one for the sink and shower in the bedroom, another for the sinks in the kitchen area (the "gray" tanks), and one for the toilet (the "black" tank).  The surprise is that even when the RV is connected to a sewer (via a flexible sewer hose), the waste is still collected in the tanks, and has to be emptied periodically by guess who?  The ground crew.  (Hey, that's me!)  And here I thought that I could just leave the waste tank valves open and let everything flow out the sewer line.  WRONG!

But wait, there's more!  An RV toilet is nothing but a fancy porta-potty.  One even needs to use special toilet paper (yet another surprise), where "special" means expensive, and about as soft as sandpaper.  Mister Whipple would never stand for this!  Fortunately, our fifth wheel has a great optional feature to help deal with the black tank's effluvia: a flushing system that sends jets of high-pressure water from a hose through the tank.  This helps flush out the poop and toilet paper remnants that stick to the tank's walls.  Now please don't read the next couple of sentences if you've just eaten, or if you are a bit squeamish about waste.  Where the waste tank outlet connects to the sewer hose, there is a fitting that mates the hose to the outlet.  That fitting is clear plastic, which allows the ground crew (me) to watch the waste as it flows from the tanks to the sewer hose.  This makes it easy to see when the tanks are empty.  Hey look, there's the corn from last night's dinner.  What fun!

Next, it's time to read the manuals -- and there are lots of them, forming a pile over four inches thick.  Practically every gizmo in or on the fifth wheel has a manual, and there's a great deal to learn and master.  Some items are so obscure, I've never heard of them before.  (For example, do you know what a de-flapper is?  I sure didn't until I read its manual.)  I realize that what I don't know can really hurt or cost us.  Advanced Calculus suddenly seems like a walk in the park.  What have we done?  I recite our RVing mantra: "Geezers do it all the time, so can we."

Coming up next:  Finding a home for our new home.
Posted by David Keller at 8:41 PM