Quit horsing around and evacuate!

It's Sunday, July 7, 2013, and we're in Shipshewana, Indiana.  You might be wondering what we are doing in a very small northern-Indiana town 42 miles east of South Bend.  Originally, we planned to go through Middlebury, Indiana on our way to South Dakota because the Jayco factory is there.  Jayco is the brand of our 5th wheel RV, and we wanted to visit the factory to see how RVs like ours are made.  (This part of Indiana, including Elkhart just to the west, is the RV manufacturing heartland of America.)  In addition to taking a Jayco factory tour, we wanted to give our RV a maintenance spa day at its place of birth.  Factory service is booked through August, so the folks at Jayco referred us to an RV service guy in Shipshewana, which is six miles east of Middlebury. Little did we know that Shipshewana, which has a significant Amish and Mennonite presence, is also home of a nationally-know flea market!  We are in an RV park located adjacent to the flea market. (We'll be going to the flea market this Wednesday.)  So far, we've heard more clip-clopping of horses as they pull wagons on the road than we've heard motorized traffic.  (There are wide shoulders on the local roads for horse and buggy traffic, which make nice bike paths as long as one navigates the horse dropping obstacle courses carefully!)

We arrived in Shipshewana yesterday from Frankfort, Kentucky, a day ahead of our planned arrival. Why a day early?  I'll get to that later in this blog entry.  (Hint: Think rain... lots and lots of it!)

Last Wednesday, we went to the Kentucky Horse Park in Lexington, Kentucky, racehorse capital of America.  (Wednesday was the only day of the week it didn't rain.)  The horse park is an equine lover's paradise.  In the park is a restaurant, where we ate burgoo for lunch.  We'd never heard of this spicy stew before, so we gave it a try.  We found it to be very tasty.  The chef insisted the burgoo was made with beef; after all, this isn't IKEA!


After a very wet fourth, last Friday (July 5) was a soaker too.  (Remember... lots and lots of rain!) Hey, we're in Kentucky, so why not visit a bourbon distillery?  Just a few miles from the Elkhorn Campground, in Frankfort, Kentucky, is the Buffalo Trace Distillery.  We took a tour.  It was a fine way to spend a rainy afternoon.


There was a tasting at the end of the tour.  A couple of shots... and what's this?  Kentucky bourbon balls! Chocolate with pecans, and a kick.  I can't recall ever enjoying a confection more than this one!  If life is really like a box of chocolates, then life is very good indeed!

Now, the denouement.  On Saturday morning, the heavy rainfall continued unabated.  Elkhorn Creek, which had meandered gently around the campground earlier in the week, has turned into a raging, muddy torrent.  The water level began to rise rapidly, threatening to inundate the campground and wash out the only access road to higher ground.  Moments later came the call to evacuate the area!  Enjoying a brief break in the heavy rainfall, we broke camp, packed up, hitched up – all in record time, and got out of the campground just in the nick of time!  As we headed up the access road, this was the scene from our truck's windshield: 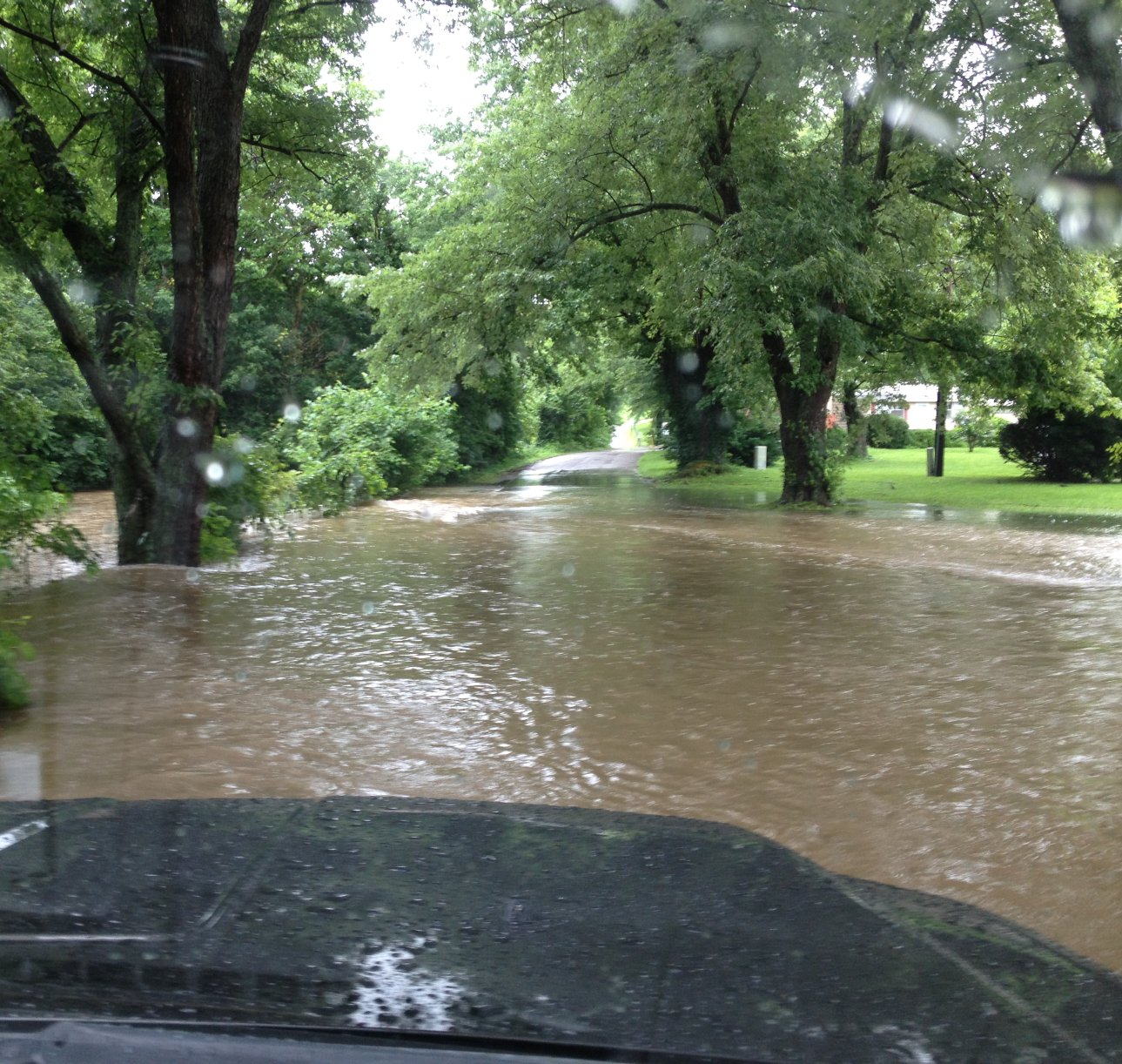 We said a prayer, crossed our fingers, and proceeded cautiously.  We plowed through the raging water... and made it safely to the other side of the road.  It was an adventure scene right out of a Saturday matinee!

As I write this, it’s a very rainy July 4th here at the Elkhorn Campground in .  The only one I know who is overjoyed at the prospect of no fireworks tonight is Annie, our rat terrier.  She goes nutty and barks incessantly when there are both flashes of light and sudden, loud booming sounds, so the fourth of July is a double whammy for her.  Looks as if Annie won’t need that 1,000 milligram dose of Zanax after all!

The trip from , to was scenic, and at last, without incident.  However, if you though after our fiasco-filled trip from that nothing else could have gone wrong while in North Carolina, you’d be wrong!

Two Mondays ago, after I had a wonderful breakfast at Janet’s bagpipe camp in Valle Crucis, (just outside of Boone, and really in the boonies), I decided to head back to our campground in Boone, a nice drive of five miles on twisty country roads.  I started our Ford F250, and after its big engine roared to life, the check engine light remained lit.  WHAT?  I popped the hood to check the engine, and sure enough, it was still there!  All of the fluid levels were O.K., so I drove back to the campground.  I called the local Ford dealer and made a service appointment.  Fortunately, the dealership had a good, many-years-of-experience diesel mechanic on its staff.  His diagnosis: bad thermostats.  (Our truck has a pair of thermostats in one housing.)  Not an expensive part, but, you guessed it, lots of labor time was required to make the repair.

For added fun, I happened to tell the mechanic that the cruise control quit working on the way to , and I couldn't get it to come back on.  The diagnostic computer noted the problem had occurred, but when the mechanic tried the cruise control, it worked perfectly.  Of course it did!  The mechanic checked one of the controls attached to the bottom of the brake fluid reservoir that disengages the cruise control when the brakes are applied – it looked O.K.  But what’s this?  A nearby control switch, also under the brake fluid reservoir, was leaking!  It would have to be replaced.  Cost of the little part?  A mere $155!  The thought of running low on brake fluid and having to make a sudden stop while going down a steep hill on a winding country road, with our 15,000 lb. home in tow, flashed through my mind.  I considered this repair to be a blessing. 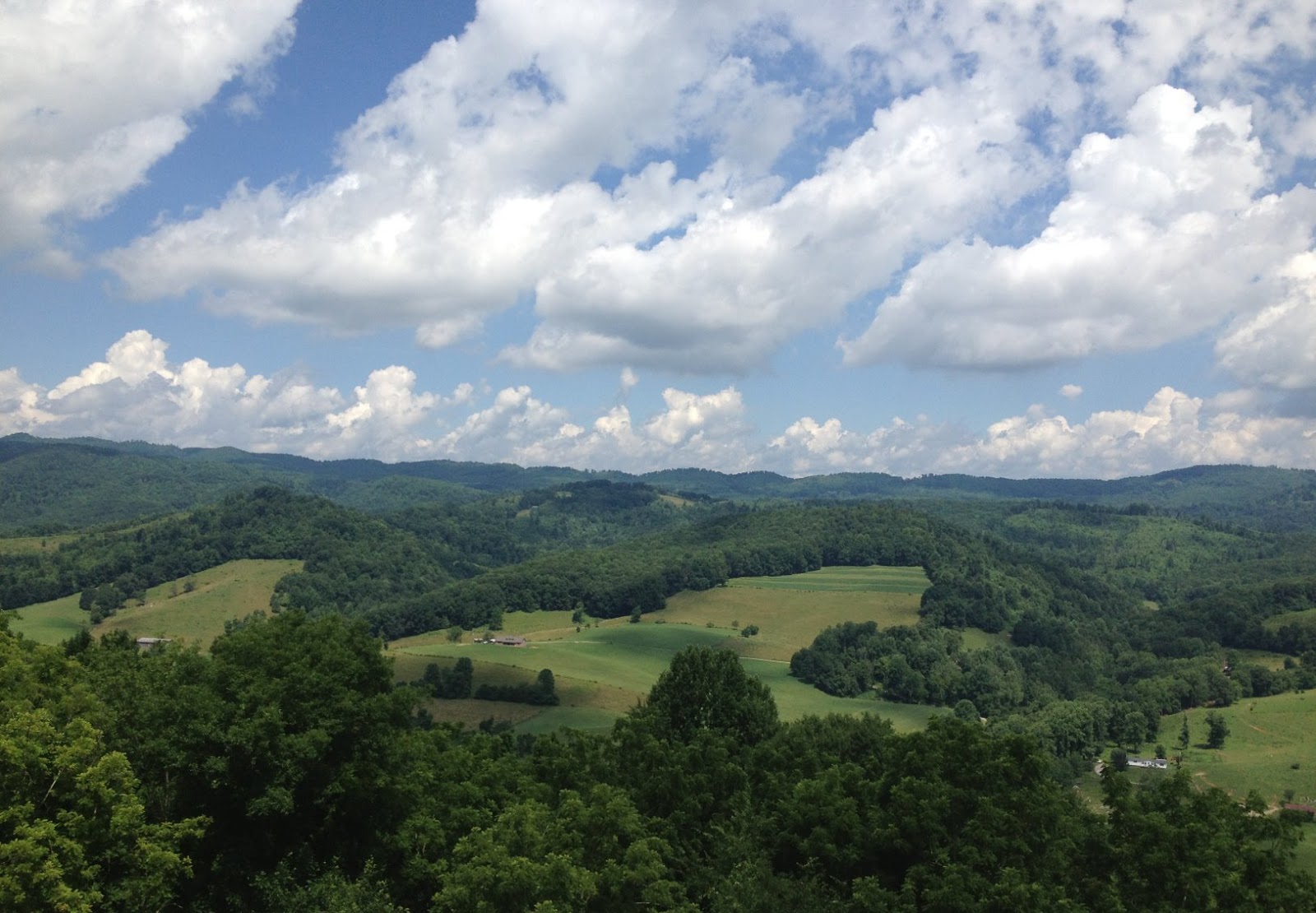